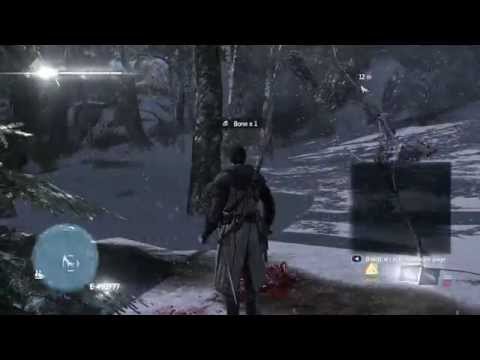 Just like in Assassin’s Creed 4 Black Flag, hunting plays a huge part in the gameplay.

Killing some animals can be as simple as just rushing them and attacking or can be quite complex as chasing them down for a quite a bit while they bleed out from earlier attacks.

Hunting Animals help craft various gear items as well as ammunition, granted players have enough animal parts for crafting. Above all else, Shay needs to find these animals first since some of them can be quite nimble and elusive.

Below you will find a list of the animals in game which you can hunt as well as their locations and tips on killing them.

Gray Wolf
Gray wolves are pretty easy to hunt and kill, though they can be dangerous if players get too close to a number of them. They can be found in Old-Growth Forest, Sleepy Hollow, Twin Snake Path, Two Bends and Vallee Verte.

The best way to defeat them is to shoot from a distance or sneak up behind for an instant kill.

Fox
Found in Albany, Dekanawida, Mount Vernon and Ruisseau du Renard. Foxes are completely non-threatening animals. However, they can be extremely fast and difficult to kill with a melee. Best approach would be to use a ranged weapon on them from a distance.

Hare
Hares are available in almost every location in the game world and given their size; they are harmless.

They are quick and nimble so using a range attack on them wouldn’t be wise instead it’s better to rush them and use a melee attack for an instant kill.

Humpback Whale
These are available in the North Atlantic, the northern portion or the south eastern one.

They are probably the safest targets to go for if players don’t yet have upgrades for their harpoons.

They can easily be harpooned as they swim around the ocean to start the chase sequence. Players should be careful here not to waste harpoons and only hit when the whale is on the surface.

The whale will constantly drag the boat towards the ice at which point players should Brace and hold till the ice has passed or broken against the boat.

Killer Whale
Like the name suggests, they are killers roaming the waters of North Atlantic in the central or south-eastern area.

Upgraded gear is necessary if players hope to survive against Killer Whales as it will be relentless in its attacks and try to kill the players and their crew.

The chase needs to be started with a well-aimed throw. Since the whales are large, they are not really difficult to hit during the chase so players should look to maximize the damage dealt at this stage with a large supply of harpoons.

When the chase ends, the killer whale starts charging towards the boat, players should aim for its head at this point to deal massive damage. Given that everything goes right, it should take two attempts to finally kill the whale.

Polar Bear
Residents of Fogo, HMS Miranda shipwreck and the Sapphire, the polar bears present a medium threat to players and can be easily dealt with from a distance using ranged weapons.

If players want to get up close and personal, a quick time event begins successful completion of which should kill the bear. If players fail, the bear ends up damaging Shay but the buttons should be pretty easy to press.

Shark
Sharks are among the easiest targets if players have upgraded harpoons. They can be found in the south western part of the North Atlantic.

The initial throw should be made when the shark appears on the surface after which players can just madly start throwing harpoons at them (but why waste in a hurry) a few good hits should be able to kill them.

White Whale
Found in the western or south-eastern side of North Atlantic, White Whales are deadly beasts and pretty rare too. They don’t appear very often so players should keep checking the areas for their appearance.

While white whales have a large health pool and are more aggressive than humpbacks, they can be defeated in pretty much the same way. Bracing is really important here to avoid losing the rope or breaking the boat against ice.

Narwhal
These are found in the northeastern side of North Atlantic and must be tackled after players have upgraded their harpoon damage and capacity since these whales have a harpoon of their own.

Players should carefully aim before throwing the harpoon. While the chase part is similar to other whales, once the chase ends the Narwhal charges the boat with its harpoon, which can be scary but players should stay calm and try to aim low in the water, in front of Shay to land a major hit.

There is also an achievement when players get their first Narwhal kill.

Arctic Fox
Found in Burgeo, Harbour Deep and Miramichi, these are just like their counterpart regular foxes. They aren’t deadly at all but extremely fast and difficult to catch so players should ambush them by hiding in a bush or use ranged attacks.

Arctic Hare
Burgeo, Harbor Deep, Havre-Saint-Pierre and Lewisporte are their usual nesting grounds. Their small size makes for very difficult ranged kills, but players can chase them and get an instant melee kill as soon as they are in range.

Like the other wolves, they don’t do much damage but getting close to them triggers a quick time event which can be successfully completed pretty easily for a kill.

Alternatively, players can also shoot them from a distance.

Beaver
Residing in Glace Bay, Grande-Entrée, Nerepis and Yarmouth, beavers are like hares but extremely slow, which means players can kill them even just by walking towards them.

Beaver pelts are also available from shops which players can use through their ship.

Black Bear
These cousins of polar bears are found in Ile Des Pins, Otetiani and St. Nicholas and pose a moderate threat because of their damage. Bears never run away from players so chasing them shouldn’t be an issue.

When players get within melee range, they can initiate a quick time event, successfully completing, which will kill the animal while failing will damage Shay. Players can also try to avoid the fight and shoot them from a distance.

Deer
They are found in almost all the open locations and are extremely fast though don’t attack players. A ranged weapon can be used or players can corner them near a wall or a tree for a melee kill.

Black Wolf
They can only be found in Or-du-Nord, which makes pretty rare and their parts valuable, which means buying them would be very expensive. Their behavior is just like other wolves so hunting shouldn’t be a problem.

Canadian Lynx:
Located in Grande-Entrée, Le Chameau and Nerepis, these are surprisingly nimble and aggressive and will immediately leap on to players forcing a quick time event.

They don’t really do a lot of damage so even if players fail the event, there is nothing to worry about.

Eastern Elk
Sept-Iles, Ash Creek, Coeur-de-l’hiver, Greystone, Red Bank and Riviere Aurifere is their grazing grounds. They are much larger and aggressive than deers and will start a quick time sequence if players go within melee range and try to kill them.

Alternatively, they can also kill Elks from range or surprise them for an instant kill. Elks are rare to find, and their parts are very expensive so whenever a player finds one, they should kill it.

If you find something missing, comment and we will help you out!